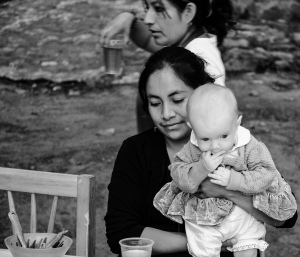 Figure 1: El bebe blanco, “the white baby”, was a spectacular sight in the pueblo of Santa Ana Zegache. Eventually, we were persuaded to buy a talisman, an ojo de venado. Attached to her arm with a braided bracelet, “the deer’s eye” would protect her from the evil eye cast by a malevolent glare. Katja and Juanita, Santa Ana Zegache 2009 Photo: Performing Pictures ©Bildupphovsrätt i Sverige 2019.

Figure 2: The Ojo de Venado (deer’s-eye charm) is a popular Mexican form of magical protection against the evil eye. Like many other apotropaic charms, the amulet itself represents an eye. It is made from the dark brown seed of Mucuna pruriens (also called velvet bean or cowhage). It is one of many “lucky legumes,” members of the pea and bean family that contain toxic, hallucinogenic or medicinal alkaloids and therefore are used in good-luck charms that come from shamanic antecedents. Mucuna pruriens seeds, like other so-called “sea beans,” regularly wash up on beaches, where they are collected and kept as lucky pieces. The Ojo de Venado charm is strung on a red cord and finished off with a plump red wool tassel. The image of a Catholic saint is printed on one side and the bean is given a finishing coat of varnish, before being sold as a bracelet, a pocket piece or a car pendant. Photo: Performing Pictures © Bildupphovsrätt i Sverige 2019.

DEFINITION Originally an anthropological concept that analyses the existential conditions involved in the usage of magic, based primarily on practices in southern Italy of the 1950s, such as mourning rituals, trance, possession, and tarantism.

AS DEFINED IN THIS PARTICULAR CASE  Losing presence—being cut off from the synthesizing process of historical becoming—equivalent to losing history, or losing society, can lead to unexpected solutions.

A decade ago our artistic work took an unexpected turn as we began collaborating with craftworkers in rural Mexico, building roadside chapels and producing video shrines that set saints in motion. A collaboration that would come to grow into an exchange of skills, knowledge, and aesthetic sensibility spanning more than ten years, as described by Becker and Brečević (2014). The concern with impermanence (migration, the severing of communal ties, unsustainable local economy), the notion of “being acted upon”, the struggle to structure one’s presence in a world where “the other” becomes more and more prominent, is palpable in Santa Ana Zegache and among other indigenous communities of southern Mexico. As we work, our daughter, Katja, is screaming, making painful noises—a chronic condition. A baby with stomach aches—or as we become more and more convinced: the existential anxiety of a newborn—will take its toll on the parents. No sleep at night and the aspiration to do a good job during the day. After an initial welcome fiesta in the pueblo, we are hard at work, daily exchanging skills, taking part in everyday village life and, as we get to know each other, learning Spanish fly. Pushed to the limits of physical endurance, we start to experience flashes of unreality and get carried away by the evaporating boundaries between wakefulness and sleep. We perceive the loss of presence as a strictly private drama, something that concerns us alone as individuals. At least, there are the two of us.

Years later we are able to associate this ‘loss of presence’—the perception of reality as dreamy and estranged from itself—with a theoretical concept. Communities, as well as individuals, can endure what the Italian anthropologist and historian of religions Ernesto de Martino (2012), called a “crisis of presence”, in which the ties between present and future come undone. While cradling our hollering baby in the dusty pueblo of Santa Ana, we stand balancing in a suspended (inattuale) position, on the verge of further becoming. In the words of de Martino we cannot fully “be-there” (esserci), and any chance of overcoming appears out of reach. In this non-dialectical state we are no longer an instance of conscious awareness, but rather a “symptom.”

Crisi della presenza signifies the failure of the Hegelian synthesis, where past and present events should propel into the future. Tomorrow will come, but it will appear disconnected and haphazard. The falling out of history is overcome through ritual as an even bigger step out of history, thus reclaiming the historicity of everyday life. “I want to believe,” is a well-known quote from the X-files—it anticipates belief as an act of Annunciation. By making it formally known to the outside world the ritual becomes real.

The sense of personal agency is undermined as every task in the entire operation becomes reactive. Attending to a screaming baby 24 hours a day, never recuperating any strength while running a demanding project turns out to be a far too ambitious endeavor. De Martino defines “crisis of presence” as a condition in which the subject is put at risk by traumatic experiences such as displacement and distress. In addition to physical manifestations of sleep-deprivation (such as perceptual distortions), we struggle with feelings of inadequacy, of not being able to comfort our screaming baby girl—never losing sight of the fact that we are guests in someone else’s reality. We are strangers who have come to another part of the world with an uncanny request: to create an electronic version of the Virgin of Guadalupe. This entails meddling with the touchy issues of religion and patrimony in a culture that isn’t ours, and our private conundrum hampers our aspirations. We don’t look professional in any way. Although all our co-workers are nothing but sweet and utterly engaged in our communal efforts, we cannot help but wonder what the word in the barrio might be.

The loss of “domestic references” and “signs of meaning” are events that can undermine the presence of the self, leading to a growing sense of disorientation. What de Martino is referring to are the social and existential experiences of subjugation, migration, and alienation, which force the subject to face his/her crisis as an autonomous and defined presence in the world. Magical rituals often come into play in such situations in order to surmount the passivity brought on by alienation.

Through jokes we conceal a growing conviction that newborns could in fact experience existential pain. Our wrongful presumption is not in treating child psychology as magical thinking, but in believing that ours is a problem that does not concern anyone else. You see, what de Martino and many other progressive/radical ethnographers of his era did, was to seek access to communities that failed to allocate the “drama of presence” into the private sphere.

And here we find ourselves, in fact, part of such a community that treats existential ailments as a general concern,where all magic beliefs, techniques, and institutions exist in order to respond to the situation; to restore threatened presence. Our co-workers—well, actually the entire pueblo—have been observing the artist/parent-couple flailing in grave despair. A committee of concerned pueblans approaches us suggesting a solution, a so-called limpia: a cleansing ritual that would fix all our problems. The presence of a white baby in this setting, they suggest, may have stirred some unwarranted emotions—covetousness, envy or other dark sentiments—which might well have led to the casting of the evil eye.

We agree to the traditional cleansing (as long as it does not involve the baby ingesting any substances). An egg, a handful of basil, rubbing alcohol and the father’s undershirt are the topical ingredients in the ritual performed by an elderly woman from the pueblo.

El Convite — excerpt from Dreaming the Memories of Now from Performing Pictures on Vimeo.

The film clip is an excerpt from the feature film Dreaming the Memories of Now (2018). Journeying into the mythical space of southern Mexico, the authors and their daughter Katja unearth complex stories in which time, memory and nostalgia are continually reenacted. This sequence comes to pass 5 years after the events described in the text. As part of a homecoming to the pueblo of Santa Ana Zegache, Katja is invited to partake in a convite (religious festivity).

The text is from the forthcoming book A postliminal script and explanatory notes on a film called Dreaming the Memories of Now. In this encyclopedia of field notes, essayism is coupled with raconteur-styled storytelling. From the vantage point of communitarian art interventions and the chronicling of apparitional trails in Oaxaca, Mexico, the texts reflect on the poetics of images, film as memory and memory as film.  The work is structured around 100+ quasifictionalized encyclopedic entries (short or medium-length essays) that can be loosely sorted into different categories: places, people, objects, language, occurrences, entities, convivialities. The alphabetic entries combine reportage, fact, personal reflections and a taste of the scholarly worldviews. The post-liminal film script and the encyclopedia are illustrated through film stills, photos, lithographs and linocuts, alongside historical images.

Geska Helena Brečević (born 1975) and Robert Brečević (born 1971) form the internationally-acclaimed artist duo Performing Pictures, founded in 2004. Their works centre around memory and movement, linking language and moving images in ways that often require a viewer’s response. Their expanding body of video animations, cinéapparitions and casual snapshots blurs lines between media forms, between still and moving images, and between ephemerality and permanence. The images are made tangible, often installed as objects outside the fine art circuit: in a Stockholm railway station, on a watchtower over a former Soviet army base, at the entrance to an Istanbul bank, as a chapel in a remote Croatian village or a building façade in an industrial area. Dreaming the Memories of Now (2018) is the first feature film by Performing Pictures and winner of the Dziga Vertov Award for Best Documentary Feature and the European Cinematography Award 2018. Web: http://www.performingpictures.art