Recommended citation: Walker, S. (2019). ‘Fragements of a life: the wrestler and the wounded boy – revealing the complexities of young migrants as political subjects through art’, entanglements, 2(1): 28-33.

This paper discusses the use of art in research with young West African men (aged 14-21) who have made the perilous illegalised journey to Italy. Drawing on findings from PhD fieldwork using a variety of visual methods, the paper examines how art can function as an entry point to different life worlds. It argues this encounter has the potential to create a space in which we might reach a ‘shared imagination’. It explores the use of art in the research process itself, as well as the co-production of a public art exhibition.

Art as expression. Art as mirror. Art as methodology. Art as activism. Art as encounter. This piece describes how I arrived at a co-produced exhibition of young migrants’ art work. It all begins with Hardi[1], a highly articulate and expressive eighteen-year old Gambian, and his drawings. Drawings which reflect the notions of justice and the right to mobility which thread through my conversations with the young men housed in the reception centre for ‘separated children’, as they are bureaucratically labelled. I volunteer for the centre, in a city in northern Italy, as part of my PhD fieldwork. Hardi’s drawings, along with those of other young men housed there, adorn the Italian language classroom, where Irene teaches Italian through ‘forgetting’, of expressing and learning through artistic means, rather than purely grammatically. Art is used as an entry point for communication. Language emerges through responses and connections to this; a form of learning through doing. The drawings are striking; and I wish to know more. He is happy to talk me through them, he says. And so, it begins.

Hardi is one of the young men I focused on for my research with young migrants (14-21 years old) in Italy. Young men who, like him, have journeyed from West Africa, via Libya, in search of a better future and ended up in a northern Italian city. My research considers the interaction between migration regimes and ‘separated children’ to explore the productive nature of borders. Focusing on the transition to adulthood I examine how the idealised concept of ‘childhood’ has a bordering effect. The central contention being that dominant migration narratives reproduce the moralised category of the deserving ‘child’ migrant, reducing those over eighteen to an invisibilised category. This notion of being invisibilised and who has or doesn’t have the power of telling is a central theme underpinning my research. Something the young men were acutely aware of. Their attempts to negotiate, contest and resist the subject positions imposed upon them, to be protagonists, were brought increasingly into focus for me through their art.

From the outset, the research was underpinned by multi-modal methodology, with a view to explore what is done, not just what is said (cf. Back, 2007). A way of researching by ‘forgetting’ through utilising non-verbal means such as drawings and photography, in a similar manner to Irene in her language pedagogy. A shared value, in fact, we both realised during my interview with her. A moment which revealed the productive nature of the interview space and contributed to the idea of the art exhibition.

Inspired by his art, I meet Hardi at his home – the semi-independent apartment shared with four fellow Gambians managed by the reception centre on the outskirts of the city. He has invited me to look through his drawings. Drawings he has done both spontaneously and with Irene. He invites me into the lounge where his drawings are laid out on the table. There are many. He has always drawn, he tells me, even back in Gambia. It helps him reflect and express things, particularly some of the difficult things he has been through.

He begins by sharing a drawing which represents an element of himself: a strongman, a wrestler:

“I feel like an adventurer – I don’t feel like an immigrant, um no. […] I feel like somebody who is living his life who has the right to see the world. So, the wrestler just represents dignity and power. And respect. Because, that’s what wrestlers do. You have your respect, you have your dignity and you believe in your power. “

This is the notion of the ‘adventurer’, the young man engaging in mobility to improve his life chances, with the ‘right to see the world’, just as many of his peers do. Save that those with the right citizenship status can access legal channels. Channels which are not open to him. He, and others like him, must instead take the life-threatening ‘back way’. The tall buildings represent Europe; and arrival. The small fairy-like figure, hope, fate and religion. A figure which has accompanied him throughout his journey, without which he could not have made it, he tells me. In spite of everything, she is still with him, even now. 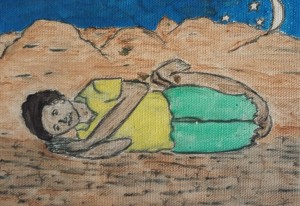 Figure 2: The stone in the side

The stone in the side

Another drawing. Highlighting the other side of the coin, the vulnerability of what are nonetheless young men crossing great swathes of the African continent in search of a better future in the absence of alternative, legal channels to do so. Very aware of the risks but, as ‘adventurers’ willing to take them. As a recent report states: “while irregular migration from Africa to Europe has increased sharply over the last 10 years, legal migration opportunities for African citizens to legally migrate to the EU for purposes of work have almost disappeared” (Mercator Dialogue on Asylum and Migration, 2018).

Here, Hardi has drawn himself sleeping on his side in the desert in Mali, on his way to Libya. This represents his journey, a journey that is still present and lived within him, an embodied trauma.  Even now, he explains, he sometimes feels the pain from a stone in his side from when he slept on the desert ground under the cold starry night.

Hardi’s drawings act as entry points through which I am momentarily drawn into glimpses of his life world. A shared moment during which the conversation flows, and the questions are not framed by myself, as researcher, but emerge in response to the drawings. A strong political subject emerges, He, like the other young Africans, is acutely conscious of both their marginal structural position and that of (most of) Africa in general. They are highly critical of the abuse and corruption they see in the elites in power and the global capital system. This is expressed in their conversations, art, writings (rap/ poetry), and photos. Threaded through with notions of justice, the right to mobility and to access education, things currently denied to them by the postcolonial framework.

Creating a space for ‘shared understandings’

Inspired by Hardi and Irene, as well as feminist sociologist Yasmin Gunaratnam (2007) who calls for art to be a part of research as a means of expression and telling stories in a way that can reach larger audiences, I ask the young men if they would be happy to exhibit their work to the public: Yes, very. So, we work with Irene on the co-production of a public art exhibition in an attempt to showcase different portraits of the young men. An attempt to combat dominant portrayals of child/ young migrants which oscillate along a spectrum of ‘innocent child’ to threatening ‘folk devil’. A means of creating visual entry points to some of their experiences. A space in which to try to amplify their voice. A productive space of encounter in which alternative stories may emerge, become visible, through art. Through this encounter, Yasmin Gunaratnam suggests, the ambiguity of meaning in art can create a vulnerability in the viewer and the artist that is both productive and connective and as such “convey complex and incoherent notions of difference and otherness” (2007, p. 271), leading to further understandings.

The space for the exhibition is a local cultural centre based in a public library. We collect up the drawings and hang them on string with clothes pegs around the space. The staff of the centre respond with surprised pleasure once everything is up. They express delight and interest at the variety of artwork on show. They were not expecting such colour, such rich expression, such variety or such politics, they tell me. This moment already rupturing some fixed notions of ‘separated children’. The opening night is full; a mixture of the general public, university students and staff, social workers and workers from the centre. There is much admiration and curiosity in the art, it inspires many questions. Young men respond. A connective and productive moment.  After, the centre ask if we can leave the drawings up for longer, so pleased are they with the exhibition. We do.

Through these entry points, through the exhibition, glimpses of differing perspectives are given. Perspectives in which the vulnerable subject position imposed by the ‘separated child’ label is contested; revealed as far more complex, playful, political and critical than the label suggests. The young men are pleased to be revealing fragments of themselves, making visible some of their complexities and politicised identities. Pleased also that a different, positive story is told about, and by, them. In the exhibition, I witness how some vulnerabilities in both viewer (including myself) and artist are exposed, as Gunaratnam (2007) posits. Through the resulting ambiguities, the aim was to arrive at what Linda Tuhiwai Smith, citing the author Toni Morrison (1939 in 1999, p. 89) calls the ‘shared imagination’. A way in which the sociological imagination can be interpreted together, a way of sharing the world. Just as Hardi shared some fragments of his world with me, opening the door to new possibilities, shared understandings and art shows.

[1] Hardi told me he would like to use his real name for this article, so the artwork can be accredited to him.

Sarah Walker is a PhD Candidate in Sociology, Goldsmiths, University of London. Her research examines the interaction between migration regimes and separated young people, aged between 14-21 years old to explore the productive nature of borders. She has previously worked as a researcher and practitioner in the refugee sector in London, working with the Refugee Council and other NGOs; as well as in academia, most recently at COMPAS, University of Oxford. She is a Trustee of Walthamstow Migrant Action Group (WMAG), based in London, which supports migrants in the UK through promoting inclusion and challenging the hostile environment.