Employing psychogeographical walking as an ethnographic method to investigate changes brought by the recent aggressive development of the city and a way of critical surveying the affectivities of the city as inspired by architectural learning techniques, together with photos and path registration, we make reference to old maps as per different town-plans to argue that Tirana can be experienced through its sensorial attributes. Our walking exercise, as a mapping of the city’s inhabitants’ gestures of enlarging gardens until cul-de-sacs are formed, unfold a spatio-temporal schizocartography.

At present, around a third of Albania’s population of 2.8 million lives and works in Tirana. Since 1990, and the beginnings of the country’s transitional period to democracy, Tirana’s population has increased by 3.5 times. This latter phenomenon has been characterized by a race among real estate companies to appropriate spaces, most often public areas such as parks, and tear down old villas. An extremely aggressive neoliberal development has continually shaped and manipulated understandings of public space. Concomitantly, the national discourse on urban development has focused solely on the plans and dynamics deriving from local government-approved top-down policies. Throughout the years, attempts to include citizens in the planning of the city have been almost null. Citizen protests against attempts to tear down buildings of historical importance such as the Pyramid or the National Theatre have garnered wide support. Concerns over human rights have been raised due to the continuous displacements of the Roma to make way for new roads. At present, daily protests against the destruction of private illegal villas at the Astiri zone have been going on for approximately four months. The predominant development discourse in Tirana portrays a citizen having no agency over the outlook of their city.

In September 2017, concerned with the pace of the loss of the affectivities of Tirana’s environment due to the constant development of the city, we decided to undertake a series of small walks that focused on the rhythms of life in neighbourhoods that have gone untouched by development efforts, comprised of old villas and less crowded and almost marooned places, often characterised by surrounding spaces. We started walking through municipal units 3 and 8, which are also the oldest parts of Tirana. We encountered a lot of gardens and spaces adjacent to old villas that bore the characteristics of private intimate spaces. Most importantly, however, we noticed a significant number of cul-de-sacs. Due to the fact that the cul-de-sacs had on their own preserved the sensorial attributes that render the specifics of a socially mediated built environment—such as the evocative painting of porches and walls in white and red, the cultivation of roses and small vase blooming plants, fig trees, old wooden and metal gates, the preservation of old runnels appearing extending to common spaces from out of private gardens—these intricate dead-ends became our leitmotif. Most often the spaces of the cul-de-sacs were clearly the subjects of tactics of territorialisation (Amin, 2008, p. 14), as they were circumscribed by wooden and metal enclosures, chairs that signalled occupied parking spaces, or hanging ropes full of drying clothes.

Being an architect and an anthropologist, most of our walks in the beginning took the form of critical surveys, and while walking, we conducted several interviews with the inhabitants of the neighbourhoods. We conducted a series of walks ourselves before deciding to issue a call for participants and carried out a four-hour-long psychogeographical walk in Tirana’s municipal units 3, 8 and 10. Walking proved an immensely productive tool, and crucial in identifying unmapped spaces, like rhizomes spreading throughout the city. We had difficulties completing the exploratory maps we wanted to distribute to the group of the psychogeographical walk because in most cases tunnels that allow passage from one street to the other, or even from one neighbourhood to another, were not represented in the official city mapping project of the OSCE Presence in Albania, on digital maps, GPS applications, or Google Maps. At times, these ‘unmapped spaces’ in the passages that allow pedestrians to cross through pavements and building tunnels were created specifically to allow access and avoid the closure of previous back streets completely.

We talked to the inhabitants of the vernacular, Italian- and Ottoman-inspired villas in municipality units 3 and 8 and post-1990s villas in municipality unit 10, whose gardens were shaped by and, in turn, shaped the surrounding neighbourhood environment. Being long-time residents, the inhabitants could provide us with facts we were not able to find in books and articles. After conducting exhaustive research on the development of the villa and its garden in Tirana, we could see how easy it was to speculate that the social and urban nature of the cul-de-sacs in Tirana had developed in two specific historical periods. The first one could be traced from the Ottoman occupation when the villa assumed the characteristics of a settlement, and later on with the appearance of more complex vernacular constructions and Italian-inspired ones (Muka, 2001; Frashëri, 2004; Riza, 2009; Vokshi, 2012). The second phase occurred after 1992 and the establishment of democratic rule, at a period when the appropriation of public space was normalized and the cul-de-sac was entrenched between its initial informality and consequent legal formalizations by the implementation of different urban policies. We could speculate that the same practices and gestures that created the cul-de-sacs were alive in municipal unit 10. This collective gesture, which made for the creation of the cul-de-sac, had only come to a halt during the dictatorship. We were facing Tirana’s image of itself through its formation of clusters in the analysed municipal units. 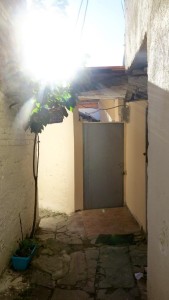 Figure 1. Entrance of a cul-de-sac in Vllazën Huta Street, 1/4 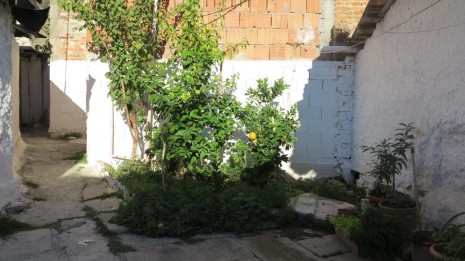 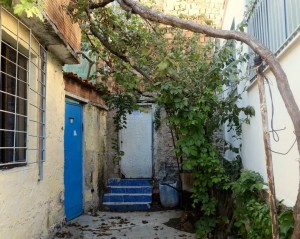 Our psychogeographical walk was accompanied by a series of other investigations pertaining to theoretical and practical frameworks that allowed us to dig deeper in relation to the urban historical development. In contrast to traditional ethnography that emphasizes a notion of the research field as bounded and insulated from the rest of the world (Pollock, 2018), we engaged in a “praxis [that was] inherently associative, an exercise between and with- (Lorimer, 2015, p. 181),” the built form, namely non-representational ethnography. Non-representational ethnography is interested in backgrounds as “(post)phenomenological lifeworlds that come to being as an outcome of practices of habitation (Ingold, 2011 in Vannini, 2015, p. 9)”, and focuses on embodied affects and their resonances (Vannini, 2015, p. 8-9). Thinking through the cul-de-sacs as rhythmic places and turning to non-representational ethnography implied our partaking in a speculative middle, an event of emerging (in)tensions, which problematized and called for new additions and thus new research events (Springgay & Truman, 2017, pp. 5-6).

The abovementioned portrayal of a citizen without any agency was challenged by our observations and exploration of the historicity of the cul-de-sacs, which unfolded during our walking methods as a display of communal gesturality across time and space. It was clear to us that the survival of the citizen gesture in the cul-de-sacs represented a unarticulated expression of a city existing beyond neoliberal development. Tracing the presence of the cul-de-sac across time we were able to experience the rhizomatic “organic aspect of rhythmed movements,” (Lefebvre, 2004) by paying attention to “what patterns of gesture, space, and time can tell about the forms they produce” (Vergunst, 2010, p. 378). Through walking, and attuning our bodies to the built environment, we were able to grasp “reality in its very human relationships [and] the rhythms of those who use it, [rhythms which] continue in past, present, and future time” (Vergunst, 2010, p. 387). We had tapped into Tirana’s “‘multilayered dynamic complex’ of time-space rhythms” (Wunderlich, 2008, p. 134). To us Tirana can be experienced through its sensorial attributes.

Ultimately, we contend that our psychogeographical walk and the conclusions that we drew regarding the cul-de-sacs in Tirana make for a schizocartography (Richardson, 2017) that unfolds in space-time.

Arba Bekteshi has worked as an urban anthropologist in Tirana, Albania, focusing on mediations of its changing urban landscape, negotiations regarding conceptualizations of public and private spaces, as well as agency relations. She has an M.A. in Anthropology of Development and Social Transformation from the University of Sussex, UK. Bekteshi is a co-founder of the Laboratory for Arts and Culture in Albania (LACA), a network of interdisciplinary scholars in Albania interested in the cross over of Albanian studies, humanities, and social sciences.

Fiona Mino is completing a M.Sc. in Architecture at the Marin Barleti University in Tirana, Albania. She acted as the Albanian national contact for the European Architecture Students Assembly (EASA), a platform for cultural and educational exchange, during 2011-2016. At present, she is part of the Radio Coli art collective, engaged with interactions in small public spaces. Mino is interested in researching the urban texture of Tirana, with a focus on the ways stratification translates into built form.