This paper examines children’s use of scatological language, encountered during an ethnography in a primary school. The humour and emotion of such language conveys something of the power and hierarchy in schools, including my own research practices. Scatological language offers children a trope for achieving shared moments of humour with the researcher, and a way to navigate the research relationship and the emotions of their participation. The paper illustrates how attending to these practices and affects can support children to renegotiate what they can do and be within school research contexts.

While conducting an ethnography in a primary school, I encounter children’s fascination for scatological language. My attention is drawn to how humour and emotions in such language conveys something of the power and hierarchy in schools, including my own research practices. This paper draws on a study into how children achieve agency in the primary classroom, using a multimodal ethnography of a Year One classroom.

The children, aged five- and six-years-old, on occasions mention the words ‘poo’ and ‘bum’ in the classroom, which is usually ignored or mildly rebuked by staff. When they use this language with me, I may laugh, for it is often funny, but mostly I just smile. I am caught between wanting children to express themselves and not wanting to be seen to encourage such language in a school context in which, a child explains, ‘you can’t say bum’. This reflects an ongoing tension that I experience when attempting to position myself as both ‘least adult’ and ‘least teacher’ (Dunne et al., 2005, p.62) with the children. I use my first name and I sit with them on the carpet, carefully resisting teachers’ suggestions that I use my surname and sit on a chair, although the extent of my resistance to the power and hierarchy in the school is limited. I make no attempt to act as if I am a child: I do not line up, for example. I aim to emphasise that children can say things to me that they would not be allowed to say to a teacher, while keeping myself sufficiently aligned with staff so that I am not seen as some disruptive force. Of course, I can choose when to be ‘least’ or ‘most’ adult, and as the fieldwork progresses I become increasingly fed up with being on the floor, so sit on a chair using the excuse that my body is old, before guiltily forcing myself back down onto the carpet. Remaining alongside the children, I keep in contact with why so many dislike the ‘hurty’ carpet; my body is intimate with its industrial fibre laid thinly over a hard base.

When James runs over to me at the end of one playtime, asking ‘can I draw a smiley face?’ in my field notebook, I say ‘very quickly’; I do not want to discourage him, but I am aware the whistle will soon signal the end of play and the time for children to line up. James continues drawing a while after the whistle sounds, so that I begin to worry that the teacher will see me causing delay. Emphasising the blurred boundary that I am struggling to straddle, James tells me, smiling, that his figure has ‘got a willy’ (see Figure One below). James frequently employs a charm that can turn a situation, something he also uses with children: when he hits Stuart hard on the head, rather than tapping him as a game requires, he is instantly apologetic making it all okay. James’s figure with a smile and large penis offers a moment of shared humour at this point of growing tension, which we both enjoy, but also, rather uncomfortably for me, the transgressive image drawn in my book exposes our collusion and is a powerful reminder of James’s non-compliance. He often does not do what I ask, resisting my invitation to engage in research activities, instead wanting me to play his games, so that I repeatedly attempt to negotiate that we talk and play. Our encounters foreground how power is invoked in the research relationship, with both working to give and get something in return. 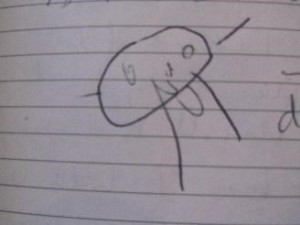 Having spent a few weeks observing and undertaking creative interviews with the whole class, I then choose a carefully selected group of six core children (including James) to shadow and interview using creative methods. I emphasise to the other children the practical necessity to focus on a few, explaining the selection in neutral terms, and stressing that I want to speak with all children informally and including everyone in group activities. By focusing on a few children, however, I come to replicate types of school-based hierarchies that I have been working so hard to resist. Towards the end of the fieldwork, Monty hugs me saying, ‘I’m special because I’m one of your six’; months earlier, soon after the core informants were selected, Margot feels her lack of status.

During a winter playtime, Margot asks for my notebook and I sit with her on a bench, together with Alexia, who is one of the core informants. Margot tells me ‘you’re smelly’ and laughs; Alexia adds ‘smelly dog’. I feign shock, so that Margot, encouraged by my response, adds ‘you’re poo, bum’, again laughing. Alexia now reverts to telling me I smell ‘like a rose, flower, beautiful princess’, and I show my appreciation with inadvertent praise, ‘how lovely’. Margot continues interjecting with negatives that Alexia counters with positives. For every ‘poo’, I get a ‘flower’ or something equally beautiful. I enjoy the initial banter but very quickly find Margot’s forceful repetitions trying, as well as Alexia’s flattery; I respond less and less, wanting both girls to stop, finding their interjections increasingly tiresome and uncomfortable. Soon Margot changes her words to echo Alexia’s endearments, and writes in my book ‘beautiful princess rose’. Alexia declares ‘I’m always kind to my friends’, so I ask ‘what if you’re cross?’ and she tells me ‘I be happy’. Soon after, I write some notes and Alexia comments ‘You’re working so hard’, looks out across the playground and calls loudly, ‘I’m so happy’.

The existence of the core group creates ripples of affect. Away from the classroom demand for compliance, Margot can step out of line throwing insults at me, fuelled by feelings of exclusion as well as my initial complicity in this moment of humour. In contrast, Alexia counters her words with a typically feminised emphasis on beauty and happiness, only once toying with pejorative language. These affects, in turn, produce further practices of exclusion and inclusion: I intervene through my mounting unease, rewarding displays of loveliness, and asserting my adult authority, helping to re-establish the normalised, feminised ‘good’ pupil who speaks of beauty, hard work and happiness. All are rewarded at school, and in research encounters. Ruby, one of the core participants, tells me she knows why I am interviewing her: ‘You chose me to do it today because I am being so happy’.

Margot communicates further disquiet at being excluded. When I explain I cannot ‘work with’ her today, she growls at me, pawing at the air like a wild animal. The intensity of her feelings strike me most forcibly another day in the playground when she writes in my notebook, then reads ‘you stink in a hot bubbly poo bath with poo.’ I laugh, enjoying her vivid language, and she smiles, but I feel troubled by the extremity of the words that I have provoked. The poo offers a moment of shared enjoyment, but its repetition and heat conveys uglier feelings of anger that capture my attention. Her writing (see Figure Two) is purposefully crafted and leaves a trace that cannot be easily expunged, so that (finally) I respond to Margot’s desire for greater inclusion. I explain that ‘I think you’d really like to come and see me’. She simply nods, as if afraid to say anything in case she reveals something darker still. I arrange a time for us to meet, and decide to introduce a group craft session for all the class.

The researcher-participant encounter aims to offer moments for children to renegotiate what they can do and be, helping to open up spaces to learn more about children and their worlds. This includes a place for scatological humour, which provides such obvious pleasure, and an important means of demonstrating the significance of the giving of attention as part of the creation of ethnographic knowledge through experiences. At the same time, there is a ‘delicate, fragile and shifting balance between excess and constraint’ in such humour, so that it might be shut down while also leaving an opening for its creative and affective force to reappear (Grace and Tobin, 1998, p.59). In this study, scatological language is a trope for shared moments of humour, as well as suggesting a way for children to navigate the research relationship and emotions of participation. For James, it seems integral to his on-going efforts to ensure his inclusion give something to him, as well as the researcher. For Margot, it conveys an emotional response to not being special, felt deeply perhaps because she is currently in the lowest English and maths sets, and ultimately helps her to be more included in the research. Focusing on the moments of scatological language use, attending to how ‘the affect created the practices and the practices created the affect’ (Youdell, 2011, p. 108), builds greater insight of the adult research role in replicating hierarchies in school, and its affects.

Perpetua Kirby is a Research Associate at the University of Sussex, where she completed her doctorate in 2018, and an independent research consultant. Previously, she spent over twenty years researching children and young people’s participation within different sectors, including social care, health and education. Her research interests are children’s agency, democratic schooling, and multimodal creative approaches. She recently co-founded TRANSFORM-iN EDUCATION (www.transformineducation.org), an initiative aimed at challenging an exclusive emphasis on children’s conformity within schools.